Nearly two years ago, we announced that the Patz Marketing Channel on YouTube had reached a new milestone, with viewers having downloaded our product videos over 100,000 times. Since then, Patz product videos have continued to attract a large audience, and we have responded in-kind. Now the Patz Marketing Channel features nearly 40 videos and has experienced over 400,000 downloads! 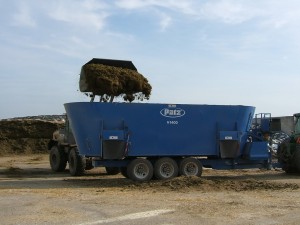 In July of 2008, an on-farm demo of our largest Vertical Mixer, the Model 3600 Triple Screw, was added to the Patz video library. With a mixing capacity of 1,400-1,580 cu. ft., this impressive and powerful mixer understandably draws a lot of attention. So much so that it reached an amazing milestone all its own this month:   “The Largest Patz Vertical TMR Feed Mixer” farm demo video has been downloaded over 100,000 times!

Thank you to all of our viewers who have made milestones like these possible.

For those that have not yet visited the Patz Marketing Channel, we invite you to do so now!  Watch demos and informational videos on the complete Patz Vertical Mixer Series (140-1,580 cu. ft. mixing capacities), Silo Unloaders, Alley Scrapers, Bale/Bedding Choppers, and more in the comfort of your home or office!