Patz > Products > Testimonials > Exactly What We Were Looking For!

Exactly What We Were Looking For! 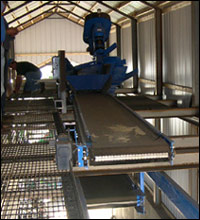 “We had been researching several manufacturers in order to purchase a material distribution system that would be a good fit with our debarker,” said Mike Breitenfeldt, Superintendent of the Sawmill at Kretz Lumber. One manufacturer that stood out was Patz. “The Patz Distribution Conveyor System was exactly what we were looking for,” said Breitenfeldt.

As bark is removed for the logs, it is dropped into a Patz 400 Material Mover, which transports it to a Patz Distribution Conveyor System. The mill’s system uses two Patz 2405 Belt Conveyors to evenly distribute the bark into an open-top semi trailer.

Kretz Lumber Company relies on their Patz Conveyors to fill a 48-foot semi trailer with bark each day. The durable and dependable Patz Distribution System has greatly improved the mill’s efficiency. Mike says, “We’ve been very pleased with its performance.”