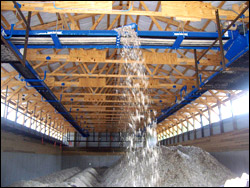 Chore-Time® Egg Production Systems, a division of CTB Inc., has been designing and manufacturing equipment for egg production facilities since 1952.

Over the past decade, the style of housing and equipment in commercial egg production has evolved greatly. Previously, manure and litter from the laying hens would be allowed to drop to the lower level of the building. In new facilities, however, conveyors move the poultry manure/litter from inside the poultry house to a separate storage building. Rick VanPuffelen, Sales Manager for Chore-Time® Egg Production Systems, was recently involved in a new installation which would implement this new manure-conveying design.

To operate the conveying system, Rick purchased and installed (2) Patz 1608 and (3) Patz 2405 Belt Conveyors. The conveyors transport poultry manure/litter from the production house to the storage building, where the poultry manure/litter can either be loaded directly into a truck for field application, or windrowed into piles which are allowed to compost naturally. This effectively reduces pathogens and odors without requiring any additives. Ammonia and flies are also reduced, resulting in a cleaner, safer environment for both birds and humans in the production houses. 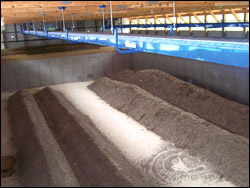 Rick reports that the Patz system of conveyors has successfully met his customer’s poultry manure-handling needs. He said, “The equipment is operating very well. The systems are high-quality and have the versatility to handle a variety of layouts and applications. The conveyors are very good and durable…and do what they are expected to do in generally tough, dirty environments,” Rick stated.

Pleased with the proven performance of Patz Conveyors, Chore-Time® Egg Production Systems regularly recommends and utilizes Patz equipment with other customers’ installations on a regular basis. Rick simply put, “Patz has a great record of moving what we need to move, where we need to move it.”

Seeing Is Believing!
Check out our YouTube video to learn more about
poultry litter/manure conveying with Patz!