Dependability for Peace of Mind 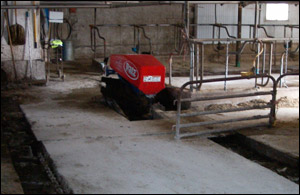 Ryan Ingersoll runs a 90-cow dairy in Cuba City, Wisconsin. Ryan relies on multiple Patz products on his family farm, which has been in operation for nearly twenty years.

Impressed with the performance of his other Patz equipment, Ryan knew that he could trust Patz with his manure handling. Unsatisfied with the job his competitive brand gutter cleaner was doing, Ryan replaced it with a Patz 400 Gutter Cleaner and 250 feet of Patz Genuine Hook and Eye Chain.

The reliability of his Patz Gutter Cleaner allows Ryan and his staff to clean the barn without fear of breakdowns. He stated, “Now I don’t have to worry if my [gutter] cleaner will work or not. I didn’t want to go on vacation before because I was worried that it would not work.”

Ryan’s experience with Patz equipment led him to make a decision he won’t regret. With his new peace of mind, Ryan can stay focused on running and maintaining the rest of his operation.