Starbar: Making Their Unique Mark on the Organic Beef Market

Starlene Moore, the owner of Starbar Farm & Ranch, and her business partner Barbara Sherry are using the Patz 1000 Series 420 Vertical Mixer to make their mark in the organic, all-natural beef and pork market.  They bought the farm in 2000, and after hard labor to get Starbar in working order began farming in 2004.  The Patz 1000 Series 420 Vertical Mixer is new to the farm, bought in February of 2015, and has helped improve many aspects of their business on the ranch located in McNeal, AZ.

Starlene uses the vertical mixer to make a 1,400 pound batch of feed per day.  The daily batch is a mixture of two thirds alfalfa, sweet sorghum, and Johnson grass, and one third home grown fodder.  The fodder Starlene uses is unique in that it is grown in a hydroponic feeding system.  The hydroponic system is a low cost, time efficient way to grow a highly nutritious feed in a very compact area.

When asked about the performance of the mixer Starlene replied, “With the Patz mixer you can take two quality feeds and bring them together into one complete and palatable feed.  It has increased our per day weight gain from 1.6 to 2.6 pounds per day.”

Starbar measures growth by running the cattle through a scale about every two weeks.  Since buying the mixer they have separated the calves from the herd.  Everything under 550 pounds stay with the mother cows, and everything over 550 pounds have been separated into a different pen.  Starlene has noticed increased weight gain and adds, “This is the best that the mother cows have looked through the winter.  The mother cows have more flesh on them and more milk.”

The tenderness of their beef is a big deal to Starbar.  They currently send samples of their beef to the University of Arizona, a USDA processing facility, where the tenderness of the beef is rated according to the Warner-Bratzler test.  The meat is cooked to 160 degrees Fahrenheit and then tested to see what amount of force is needed to shear half inch cores of the meat and given a tenderness number.  The steaks are given a number rating with one through seven classified as extremely tender.  Ratings over seven increasing in toughness as the number rating increases.  Starbar steaks, which are dry aged in anartisan, twenty-one day process consistently receive “extremely tender” scores of five or six.  They have, as proven by the test, shown that their steaks are more tender when their cattle are fed the mix of the hydroponic fodder and grasses made with the Patz 1000 Series 420 Vertical Mixer, versus using a less complex feed.

Starlene and Barb have plans to grow their Starbar organic all-natural beef business in the future.  Barb is currently in charge of the marketing and began selling their beef from a refrigerated trailer in 2013 at farmers markets in Sierra Vista, and Tucson, Arizona.  Customers can purchase their Starbar beef on Amazon.com as Starlene and Barb are licensed and labeled to sell online.  With their mixer Starlene hopes to increase their steer growth and production by two thirds so that in their expanding place in the market they can provide their premier beef to all their customers.

In summary, Starlene and Barb, with the addition of the Patz mixer to their operation, have seen: an increase in weight and growth in their cattle, an improvement in the year round condition of their herd, a decrease in the feed wasted, and overall a better product to sell to their customers.

The ladies also note that their Patz dealership, Earhart Equipment Corp., is very customer oriented and is not always all about the sale.  “They have been very helpful with the service and problem solving, and that they are a 24/7 dealer and there is always somebody on call.” 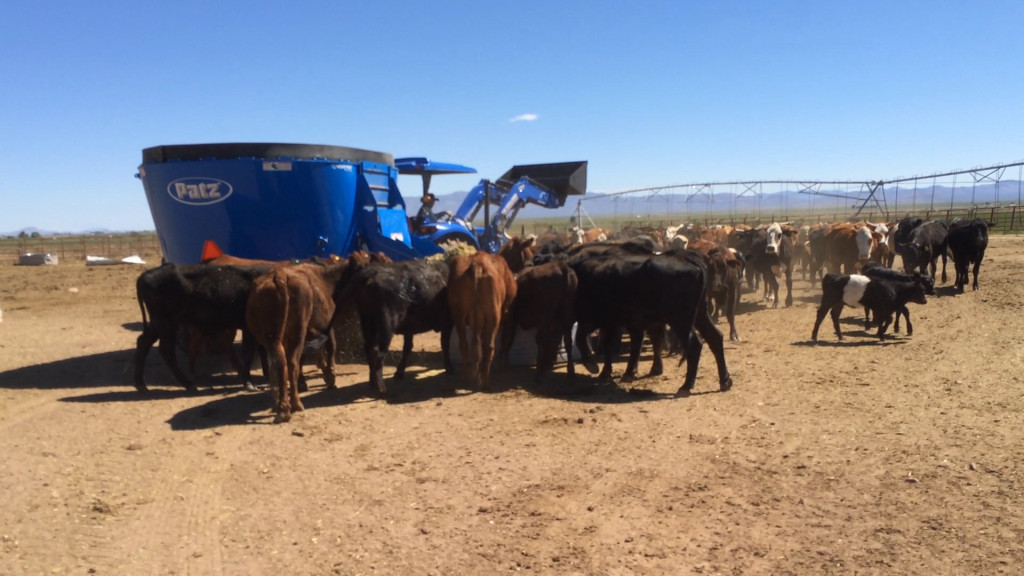 Starlene and Barb are also very happy that their mixer is made in the U.S.A.  They said, “One thing that is a big deal is that the mixer is made in America, it’s in the quality of the product.”

Starlene and Barb would recommend the Patz mixer to others and when asked if they would do it all over again Starlene joked, “Barb would buy an R.V. instead.  No seriously we love the machine!”