“It’s a high quality product and does what it is advertised to do,” says Andrew McGibbon, owner of the one hundred and forty square mile Santa Rita Ranch, about his Patz 1200 Series Trailer Vertical Mixer. 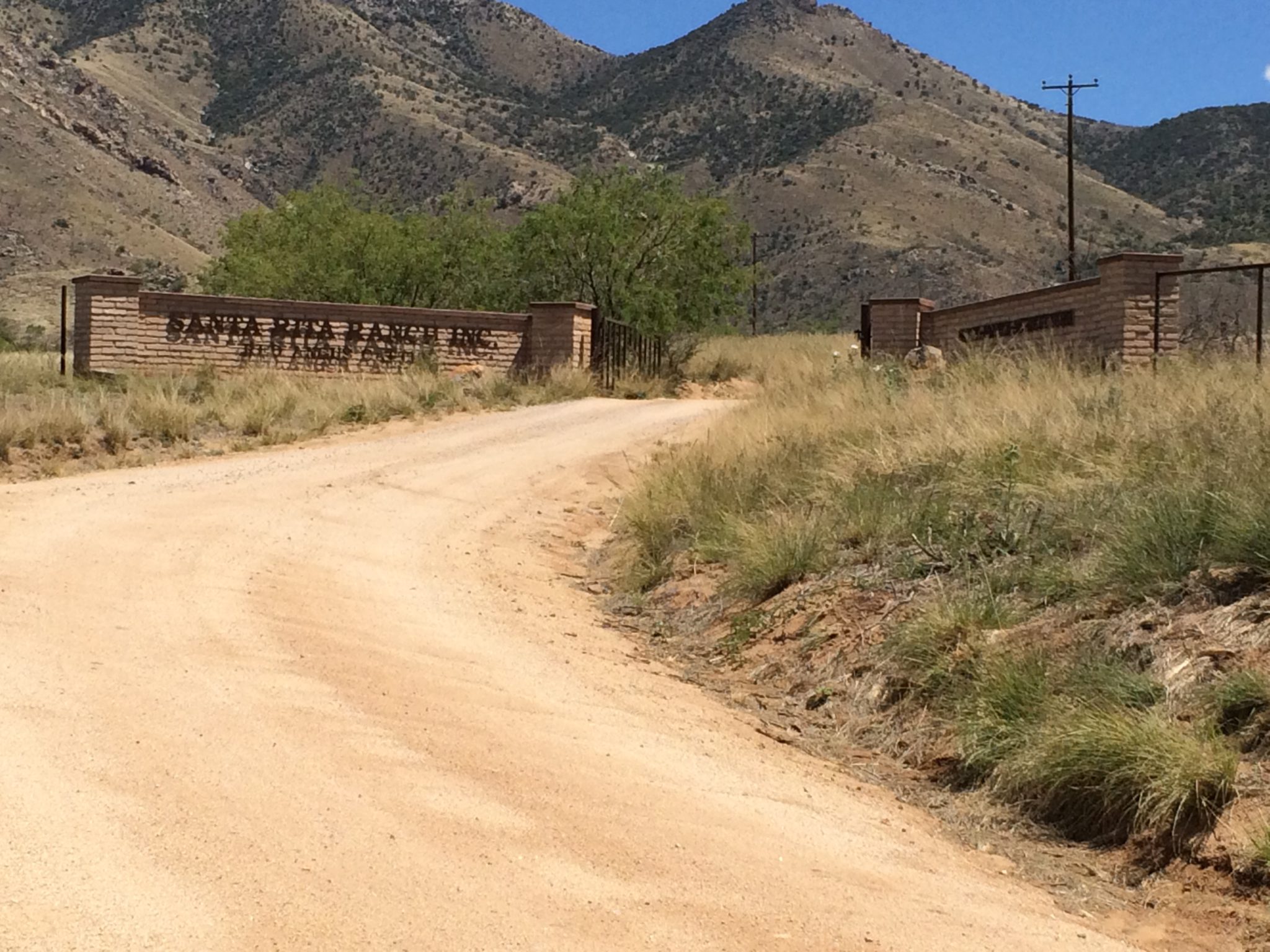 The ranch was started in 1884 and his grandfather took over in the 1960’s.  In total the family started with the original ranch and have since bought and added two more for a total property of ninety-five thousand acres with an average elevation of 5,500 feet above sea level, and a lot of natural wildlife.  Andrew, a third generation rancher, and his wife Micaela, a fourth generation rancher, and their
4 children live on the ranch in Green Valley, Arizona full time along with six other families who call the property home.  The McGibbons raise registered and commercial Red Angus cattle and have a production rate of up to one thousand per year.

According to the local Patz salesman Andrew is highly respected in the area and in the auction barn for raising quality beef, and it appears his daughter, Elizabeth a.k.a. Izzy, is following in his footsteps.  Izzy won: first place in market, third overall in the championship, Grand Champion Jr. Showman, and received a perfect score winning Grand Champion Round Robin (a competition in which horse, goat, dairy goat, lamb, dairy cow and beef are all entered) at the Pima county fair with her Charliois cross steer. 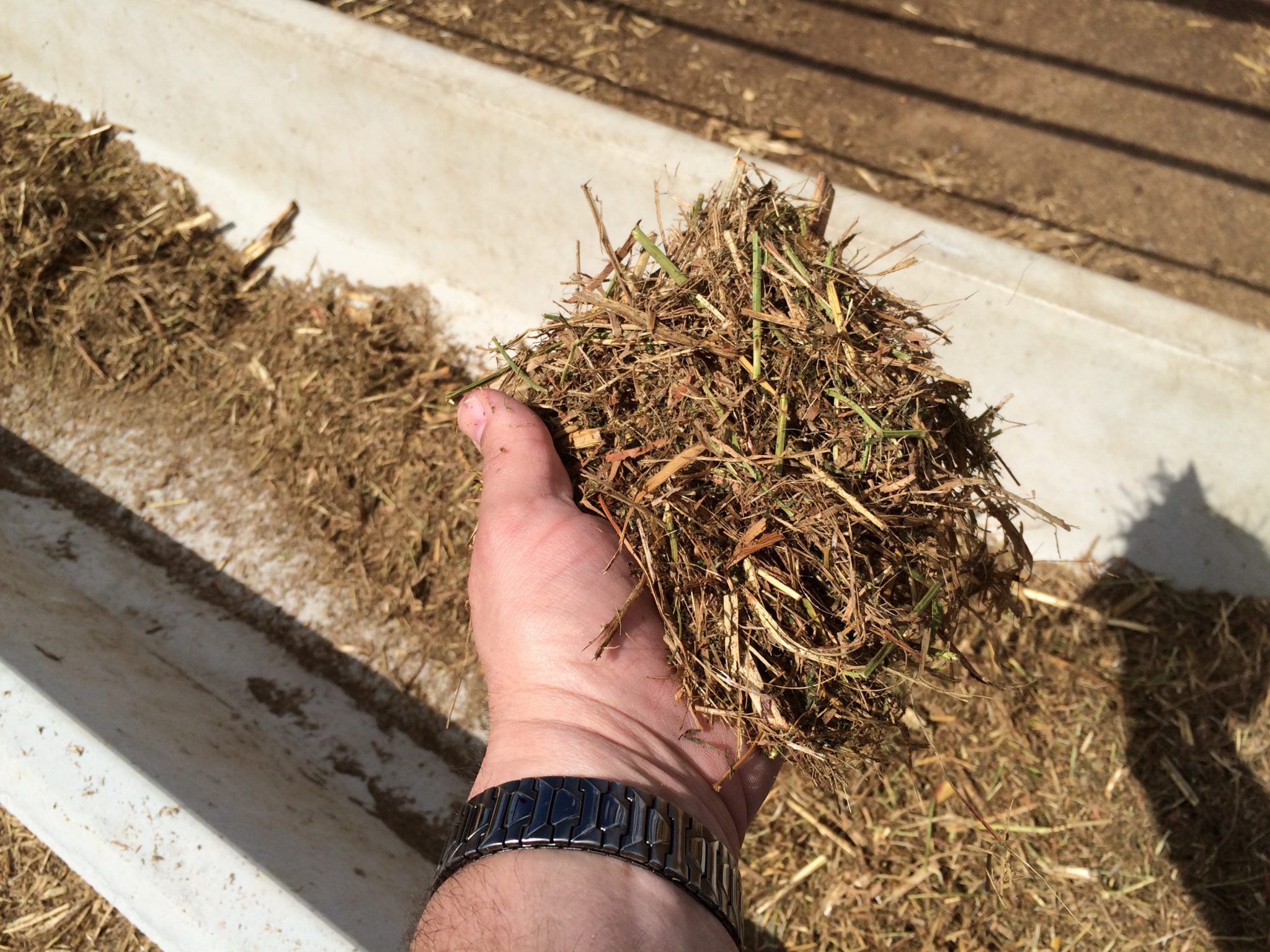 The feed mixture, including the milo stalks.

The cattle are on range for most of the year, but are brought in for weaning and shipping where Andrew feeds them a diet that would be similar to what they would get on the range.  He uses his Patz mixer, upgraded with extra Raptor ™ knives, to chop up a feed mix of coarse corn-like milo stalks, alfalfa, molasses, and a “distiller” grain mix which he loads into j bunks for the cattle.

“The mixer converts the crude feed and large stalks into small, more palatable size for feed utilization,” and Andrew is experiencing fifteen to twenty percent less waste and thinks it could even be as high as twenty-five percent less than before.  The j bunks used to have to be cleaned out at least every other day if not daily because the cattle would “eat the good stuff” and leave the hard stalky parts.  Now with the help of the Patz 1200 Series 500 Vertical Mixer the j bunks only need to get cleaned out one or two days a month.  Andrew, who measures the cattle feed input as part of production has noticed that the ranch is saving whole bales of milo from being wasted.  Andrew says, “The mixer does a real good job on creating a uniform mix, and it’s a big deal to convert a lower cost/ lower quality forage that the cattle will utilize.”  The amount of waste reduced is very important as Andrew believes he can pay off the mixer in four years, maybe less, with the money he is saving on feed.

Not only does the Patz vertical mixer help to reduce the amount of feed wasted, the mixer’s compatibility and adaptability also saved Andrew quite a bit of money in another area.  The large capacity mixer is compatible with a lower horsepower PTO.  This was important to Andrew because the Patz mixer was compatible with the one hundred horsepower tractor that he already owned; saving him the cost of a new, larger tractor that would use more fuel than his current tractor.  The competitor units would have needed a bigger tractor for the same size mixer, and the Patz mixer itself has more options and is less expensive than the competition.  The only thing Andrew wants to change about his Patz mixer is to move the camera behind the discharge conveyor so that the conveyor does not collide with the feed j bunks.  Andrew notes his Patz mixer is a “Tremendous value and a high quality built machine.”

“The mixer does a real good job on creating a uniform mix, and it’s a big deal to convert a lower cost/ lower quality forage that the cattle will utilize.” Andrew McGibbon (pictured)

The Patz 1200 Series 500 Vertical Mixer also beats the competitor in grind time. The competitor unit used to take forty-five minutes to produce the same amount of the ground-up feed mixture that the Patz unit can put out in fifteen to twenty minutes.  Andrew also wasted time cleaning out the bunkers of the feed the cattle wouldn’t eat and shoveling up the longer material that would fall out of the previous competitor unit.  The Patz mixer reduces feed waste, and saves Andrew time and money.

Lastly, Andrew was also pleased with the personable and friendly service at Earhart Equipment Corp., and the availability of their salesman Gord Demery, who he could contact at any time.  The mixer Andrew was looking for had to meet several requirements: the ability to customize, and the compatibility with his tractor to name just a couple.  The Patz 1200 Series 500 Vertical Mixer was reasonably priced and a great value compared to the competitors which were a lot more expensive and offered fewer of the options Andrew needed.