“Best Mixer Out There!” 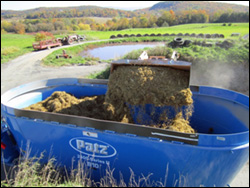 Since switching to a Patz Vertical Mixer, the Briggs appreciate the ability to incorporate more hay into their rations.

Briggs Farm is run by third generation farmers Dale and Alma Briggs and their children. The Addison, Vermont dairy, founded in 1928, is home to a herd of 170 milking cows and 170 heifers.

Keeping their facilities and animals clean is of utmost importance to the Briggs. Due to their hard work, they have achieved the second lowest somatic cell count in the state of Vermont! Having owned Patz equipment since the 1950s, the Briggs know they can count on Patz feed and manure handling equipment to help maintain their high standard of excellence.

To increase butterfat components, the Briggs decided to incorporate more hay into their rations. This proved difficult with their old horizontal mixer, so the family opted to purchase an 810 cubic foot Patz 2400 Series II Twin Screw Vertical Mixer.

Just as he had hoped, Dale’s new mixer handles larger quantities of hay with ease. “We process two big square bales of baleage twice a day, and the mixer handles it without a problem,” he said, “The reliability of the machine should mean it will give long, trouble-free use. Payback will be in ease of maintenance and longevity.”

After experiencing all of these benefits, the Briggs couldn’t be more pleased with their Patz Mixer purchase. Dale said, “It’s the best mixer out there!”