Quonset Farms, LLP is run by sixth generation farmer Mark Hesselink and his family. The Oostburg, Wisconsin dairy, which was founded in 1847, now consists of 588 acres and approximately 800 head of dairy cattle, including milk cows, yearlings and calves.

The Hesselinks decided to buy a new vertical mixer because they weren’t satisfied with the performance of their reel style mixer. They requested on-farm demonstrations of two Patz vertical mixers – the Model 800 Twin Screw and Model 2400 Twin Screw – as well as five other mixers from competitive brands. In addition to the on farm demonstrations, they tested the quality of the mixes with Penn State Shaker Box tests performed by a nutritionist. After all the demos were completed and test results in, the decision was an obvious one: the Patz 800 Series Twin Screw Vertical Mixer. 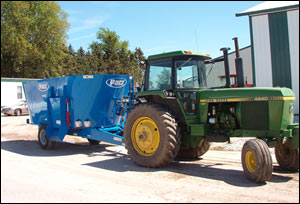 Mike said there were several reasons why they chose the 800 Series Twin Screw. “The number one reason we bought a Patz mixer was the mix quality,” said Mike, “When all the demos were completed, the Patz had the best mix.” Mike also noted, “It has a low loading height of 102 inches, mixes fast, and can mix small batches.”

Their mixer also allows them to incorporate homegrown hay into their rations. Quonset Farms, LLP, is very happy with the performance of their Patz mixer and the flexibility it offers them.