Patz > Products > Testimonials > We Should Have Bought It Five Years Ago!

We Should Have Bought It Five Years Ago! 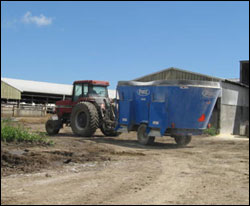 Jim and his wife Sherri operate Melichar Broad Acres in Port Washington, Wisconsin. The dairy has been in the Melichar family since 1937.

Melichar Broad Acres had been using a competitor’s brand horizontal mixer on their dairy prior to switching to Patz. Since their horizontal mixer could not process large bales of hay efficiently, they had to preprocess the hay for their ration – which significantly lengthened their feeding time.

After opting for an on-farm demonstration of a 620 cubic foot Patz 800 Series Twin Screw Vertical Mixer, the Melichars were so impressed that they purchased the mixer. Jeff Smith, who handles the mixing and feeding at the farm, was very impressed with the efficiency of the Patz Vertical Mixer. “We used to spend four hours a week grinding hay,” said Jeff. “Now we only have to handle the hay once because the Patz mixer easily processes the large square bales.”

According to Jeff, he used to have to wait about six minutes after filling their old four-auger mixer before feeding out. “With the Patz mixer, after the last ingredient is added, we’re ready to unload,” he said.

The Patz Vertical Mixer discharges feed fast, too. Jeff stated they are able to unload their 15,500-pound ration in about three and a half minutes with the Patz Vertical Mixer versus eight minutes with their old mixer. “It mixes fast, unloads fast, and everything is cleaned out when we’re done,” adds Jim. “We should have bought the Patz vertical mixer five years ago.”

Seeing is Believing!
Contact your local Patz Mixer Dealer for a demo.