Mixes Rations In Two Shakes Of A Lamb’s Tail!

Tony’s lambs are sold to Coles, the second largest supermarket chain in Australia. Since supermarkets expect a top-quality product, Tony must keep his flock in prime condition and at the proper weight. He recognizes that a well-mixed, nutritious ration is essential to meeting these goals. When he was searching for a new feed mixer, Tony consulted his Patz Distributor and invested in a Patz 800 Series Twin Screw Vertical Mixer.

Since replacing his old mixer wagon with a Patz Mixer, Tony has been able to incorporate a wider variety of feed ingredients into his rations, including rough hay for the ewes. The Patz mixer easily handles his 13,000-14,000 pound batches, which generally consist of 80% grain, 12% Lucerne hay, and 8% grain syrup. 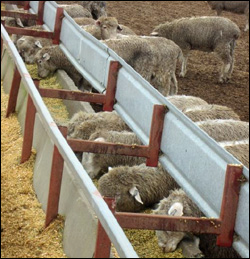 The well-blended TMR helps minimize sorting. As Tony said, “The mixer provides a good finished product. The lambs clean up all the feed even though the chop (Lucerne hay) is a longer length.” Now that they are consuming a more balanced diet, the lambs’ rate of gain continues to increase.

Besides reducing feed costs and improving rates of gain, Tony’s new mixer has been saving him valuable time. In comparison to his mixer wagon, he stated, “The Patz mixes quicker, chops faster, and cleans out better. All in all, it’s been a massive time saver.”