“It Makes Feeding A Lot Easier”

Jim Schnitzler of Decorah, Iowa has been in the beef industry for 40 years, ever since he began farming with his father in 1974. He took over the cow-calf to finish operation in 2008 and raises 125 cattle.

Shortly after taking over the family beef operation, Jim began looking for a new, more efficient feeding method. With years of excellent performance from his Patz Silo Unloader, Conveyors, Feeders, and Pumps, Jim knew that his local Patz Dealer would have just what he needed. He ended up purchasing a 270 cubic foot Patz 800 Series Single Screw Vertical Mixer. 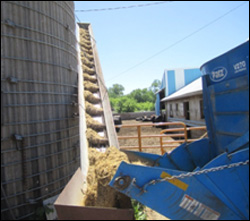 Jim’s steer and cow rations include a variety of ingredients, such as haylage, liquid protein, loose hay, dried distillers grain, corn silage, and ground corn. Regardless of his ration recipe, “My Patz mixes a good feed ration for the cattle,” Jim stated. Feeding a thorough, consistent TMR has led the herd to eat better, resulting in increased weight gains.

In addition, Jim reports that his Patz 800 Mixer saves him time and labor. He remarked, “It makes feeding a lot easier.”

Seeing Is Believing!
Check out Jim’s video testimonial,
or contact your local Patz Mixer Dealer for a demo.