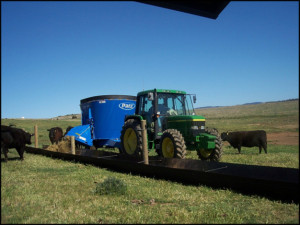 Hillview Angus Stud has excellent pastures for grazing most of the year. During the winter months when grass growth is slow, Danny feeds a supplement ration to his stud cows and bulls. Before a show or sale, Danny also feeds his bulls a supplementary ration of oaten hay, baled Lucerne silage, minerals, and a molasses.

Danny has had no trouble processing, blending, and delivering these supplementary rations ever since he purchased his 350 cubic foot Patz 800 Series Single Screw Vertical Mixer from his local Patz Distributor. “It’s such a simple machine; nothing goes wrong,” he said.

Prior to purchasing his mixer, Danny had been feeding with racks or from the ground, a method which wasted around 30% of his feed. Now that he is delivering a thorough, consistent TMR with a Patz Mixer, he has eliminated feed waste. Danny has reported that his bulls clean the troughs out completely! As a result, Danny has been enjoying higher sale weights and sale prices.

Taking all of these benefits into account, Danny said, “I would recommend a Patz Mixer to anyone wanting to improve their stock, whether it be stud or commercial.”