Kyle Ulferts cut his feeding time in half and no longer needs to pre-process hay!

After many years of processing hay with a bale processor and feeding with a tumble mixer, Kyle decided that he needed to simplify his feeding methods. He consulted his local Patz dealer and purchased a 350 cubic foot Patz 800 Series Stationary Vertical Mixer.

With his new Patz mixer, Kyle is able to put 700 pound round bales right into the mixer – no pre-processing required! Kyle uses a 30 horsepower motor, which processes the round bales in 2-3 minutes. He then adds his grain and feedstuffs, producing a palatable total mixed ration in only minutes! 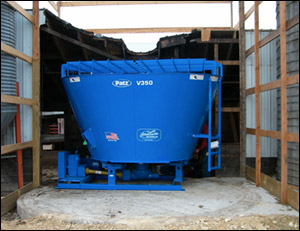 Kyle really likes the high speed of his stationary mixer. “It cleans out the mixer great and processes the bales quickly,” Kyle stated, “I cut my feeding time in half!”

In addition, Kyle has found that his herd is healthier as a result of putting his hay directly into his Patz 800 Series Vertical Mixer. “I haven’t had a single DA since using the Patz,” he remarked, “It is the only way to go. This mixer is the ‘real deal’.”