In the fall of 2008, with the completion of a major expansion, Krueger Dairy Farms, LLC was born. Owned and operated by Jim and Lisa Krueger, this expansion was one of the many ‘steps’ planned by this Hilbert, WI dairy operation. 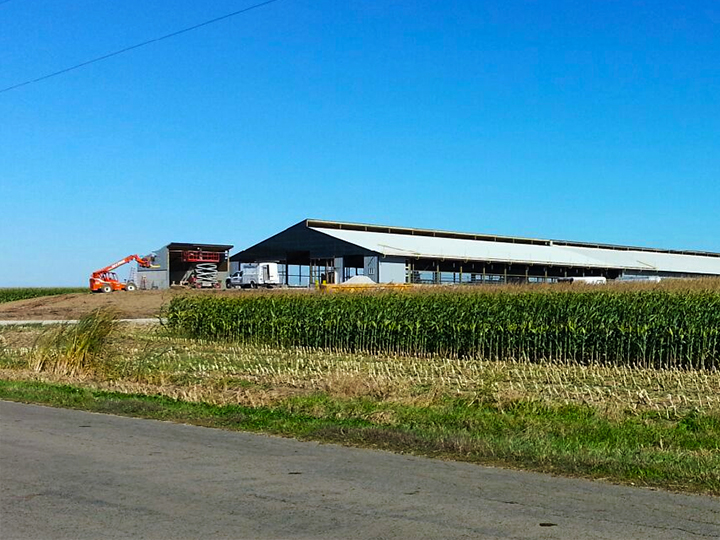 Fast forward to the fall of 2014, another ‘step’ now in its final stages includes the expansion of their free stall barn to 456 ft. long and a milking parlor redesigned into a double 10. These changes are the most recent steps in this family’s rich farm history that began in the 1950’s.

Jim’s father, Richard, purchased the original site with 17 dairy cows and 132 acres in the 1950’s. Patz equipment first appeared on the Krueger farm in the 1960’s, when the installation of a Model 400 Gutter Cleaner made chore time much easier. In 1970, a large addition was added to the barn and the herd was expanded to 100 cows – considered one of the largest herds in the area at that time.

In 1992, Jim and his wife Lisa purchased the dairy herd from Jim’s parents. Additional stalls were added to the barn bringing the herd to 125. A manure storage system was added featuring several Patz Gutter Cleaners. Twenty-two years later, these units are still in use! Jim also purchased their first TMR mixer, a Patz 9100 290 cu. ft. tumble mixer.

In 2007, the couple decided to undergo a major farm expansion. After a lot of planning, a new facility was constructed across the road from the original farm in 2008. This consisted of a 320 ft. long 4 row sand bedded free stall barn, a double 8 milking parlor and a 2-stage manure storage system. During the expansion planning process, the Krueger family looked to their long time Patz Dealer, Schmidt Building & Equipment, for their valuable insight in designing the expansion to include labor saving techniques and equipment. Jim stated, “By building a complete new set-up, we were looking to increase our herd size and make our workload a bit easier. By incorporating Patz feed and manure handling equipment into the project, we were able to do just that.”

For feeding, the Kruegers chose a Patz Twin Screw 620 Trailer Vertical Mixer to process and deliver rations to cattle in the new facility. Jim said he likes the fast mixing of all ingredients, as well as fast cleanout. The Kruegers prepare two 18,000 pound dairy
rations and one dry cow ration each day. They have seen an increase in milk production which Jim contributes, in part, to the Patz Vertical Mixer. Milking three times daily, the cows average around 90 lbs. a day.

To keep things clean, the Kruegers chose to install two Patz Alley Scraper systems. On one side of the barn is a Patz IntelliChain® Alley Scraper and the other side has a Patz IntelliCable® Pro III Alley Scraper. Jim commented, “We have already seen 3 times more life from the jacketed cable compared to standard cable.” The alley scrapers deposit manure into a cross channel, which uses the Patz IntelliShuttle® System to move it to a reception pit. From there, a Patz 2016 Tundra™ Pro Hydraulic Pump moves the manure to storage. Jim estimates that the Tundra™ has moved over of 40 million gallons of manure since its 2008 installation. “Handling sand-laden manure was a concern when we built this, but the Tundra™ pump hasn’t missed a beat,” states Jim. The Kruegers also use a Patz 3333 Multi-Use Vertical Pump to handle parlor waste water, as well as manure, from the parlor and holding area.

Krueger Dairy Farms, LLC currently has 340 dairy cattle with plans to increase to 400 head plus young stock. The Krueger operation continues to be a family affair. Jim & Lisa have four children – Kira, Kolton, Kody, and Karson that work on the farm. Jim’s father, Richard, crops about 1000 acres to provide feed for the herd. Jim’s brother, Mike, is responsible for feeding the cattle, raising the heifers, and assisting with crop production. Another brother, Paul, helps with morning milking, working full time off the farm, and helps with field work in the evenings. Jim and Lisa’s oldest son, Kolton, is currently enrolled in the Dairy Herd Management program at Lakeshore Tech College, and helps out with chores whenever possible.

What began as a small husband and wife farming  operation in the 1950’s has grown to include multiple generations of family members running today’s large dairy. Now in its sixty-fourth year of operation, it is safe to say dairying is definitely in the Krueger family’s DNA!