(Pound, WI) Patz Sales, Inc., Pound, Wisconsin, teamed up with the city of Algoma, Wisconsin, to resolve a big problem for the city’s wastewater treatment facility, creating more convenience for sport and charter fishermen. Patz designed and installed a Patz conveyor system, including customized fish cleaning tables for the Dettman Fish Cleaning Facility, the first facility of its kind open to the public. This has created a win-win-win situation for the city, fishermen and the environment. 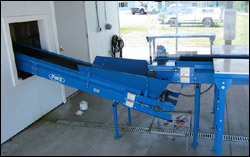 Algoma residents and visitors catch over 150,000 fish each year on Lake Michigan. Fishermen cleaning their fish at the marina generate thousands of pounds of fish scraps, causing problems for the city’s wastewater treatment facility. Fish scraps in the city of 3,500 people created waste equal to a city of 30,000.

Patz team members worked with Ken Taylor, Algoma Alderman and Chairman of the Marina Committee, to design the fish cleaning station for public use. Patz manufactured the customized cleaning tables set up on two sides of a 30-foot Patz 8916 conveyor. Anglers on either side of the table can discard their fish scraps onto the conveyor, which empties onto a second Patz conveyor. The incline of the second conveyor allows the excess water to drain off before being transferred into a separate storage area. The fish scraps are then sent away to be processed into an environmentally friendly, organic fertilizer.

Up to 20 anglers can clean fish at the same time, leaving the fish scraps at the marina, taking filets home and not the mess. The tabletops can easily rinse clean and do not stain. Water hoses are provided to help the fishermen clean up their mess, as well as themselves. Sheets of clear plastic hang across the center of the cleaning tables to deflect the water sprayed on either side of the tables.

At a ribbon cutting ceremony on June 29, Patz Sales, Inc. President Darrell Patz commented on his company’s participation in the project and provided a brief history of the company. Patz stated that the new facility “shows great innovation” and expressed his gratitude for the opportunity to assist with the project, which in turn has exposed the company “to many diverse opportunities.” 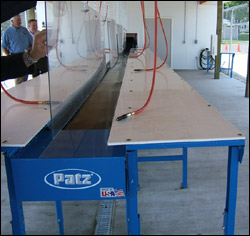 Over the years we have learned how to use our conveyors and material movers in ways other than on the farm,” said Patz. “Today we’re proud to add to that list, fish cleaning facilities.”

Patz introduced Speaker of the House 89th Assembly District and candidate for 89th Congressional District of Wisconsin, John Gard. An avid fisherman himself, Gard recognized the facility’s convenience to fishermen and thanked the Algoma Marina Committee for their leadership in aggressively handling their fish waste problem. have learned how to use our conveyors and material movers in ways other than on the farm,” said Patz. “Today we’re proud to add to that list, fish cleaning facilities.”

“It’s easy to wait until tomorrow,” said Gard. “You dealt with it aggressively and you thought ahead.”

Gard anticipated Algoma’s new fish cleaning facility would become a model to other communities facing similar issues, adding, “This is going to be a story that is duplicated in many places.”

Gard also praised Patz for the company’s successful partnership with the city of Algoma on this project.

“You’ve been a staple in northeastern Wisconsin for many years and you will be in the future,” said Gard of Patz. “We’re really proud of the tremendous work that you’ve done here.”

Gard, who grew up in Lena, Wisconsin, is no stranger to Patz equipment. Growing up on a dairy farm, Gard commented that he was thankful his parents purchased a Patz Barn Cleaner, saving him and his brothers from the daily labor of cleaning manure out of the barn.

For more information about the Patz conveyors used on this project or to discuss your material handling needs, contact Curt Tisler, National Sales Manager, at 920-897-2251, ext. 1223 or e-mail him at curtistisler@patzcorp.com.