Patz has a vertical-style TMR mixer for every farm. 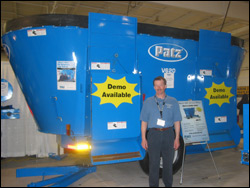 The small northeastern Wisconsin community of Pound – located 40 miles north of Green Bay, with fewer than 1,500 residents – is home to a company that has been one of the nation’s leading producers of farm materials handling equipment over the last half-century.

It all began just after World War II when Paul Patz, a young farmer, saw a need for a rugged, efficient piece of equipment that would ease the drudgery of his daily chore of cleaning barn gutters. After working for two years to improve his design, Patz sold his first barn cleaner in 1948, which featured the one-piece, heavy-duty link that Patz had invented and patented.

Following on the heels of his successful barn cleaner, Patz designed and produced silo unloaders for tower silos, and then added conveyor systems and mechanical feeders for cattle over the years, noted Patz district representative Kevin Habeck, who helped coordinate the Patz display at the recent Wisconsin Public Service Farm Show.

Habeck explained that the company then added manure pumps and manure storage facilities to its product lines. “In the last 10 to 15 years alley scrapers for freestall barns have also become an important part of our production,” he said.

Habeck reported that although TMR mixers have been used on Wisconsin farms for three decades, there have been significant design changes that make today’s units much more efficient. “They’ve gone from cement-mixer-type barrel mixers to auger-style mixers that used three or four augers to mix the feed materials in a box,” he explained.

That product evolution has led to the latest models of vertical TMR mixers, which feature a large vertical screw inside the mixing chamber. “Their big advantage is that they can handle virtually any type of feed,” Habeck said. “They can handle dry bales, small and large square bales as well as large round bales. They can also handle silage-type bales that are baled wet and wrapped. That versatility is a big reason why vertical mixers have become so popular.”

Habeck stressed that vertical TMR mixers are available to match nearly every type and size of farm operation. “For the smaller dairy producers we have stationary models powered by electric motors that have mixing capacities from 270 to 350 cubic feet,” he noted.

For larger operations there are trailer-style mixers that start at 270 cubic feet and range up to mixing capacities of 950 cubic feet. “The addition of side extensions brings the capacity of that mixer up to 1,100 cubic feet,” Habeck pointed out. “That unit will mix feed for 200 cows in one batch, but these mixers can also mix small batches of feed.”

Habeck emphasized that Patz is proud to be a Wisconsin-based mixer company that still has manufacturing facilities in the state. “With our Pound office and production plant, we have more than 5 acres under one roof,” he said.

All Patz products are sold through a network of dealers and distributors. “The majority of our sales are in the dairy regions of the U.S. and Canada,” Habeck said, “but we also have a growing export market in many other countries.”

Habeck believes the best way to sell a TMR mixer is with an on-farm demonstration. “Our feeling is that if a customer is interested in a product like this, the best way for him to know if it’s going to do the job is for us to bring it out to his farm, at no obligation, so he can run it with his tractor and his feed and see exactly what it will do for him before he makes the buying decision.”

* Reprinted with permission from the Wisconsin State Farmer.